Walking in the Land of the Faliscans 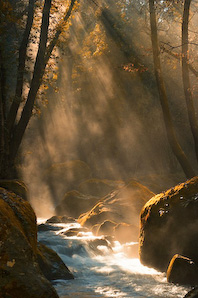 “All this water comes from up there.” Of the diverse mountains encircling us Giampietro singles out the Sabatini range to the south. Mouths agape, we’re standing on a precipice overlooking the deep, wooded chasm of the Treja River, snaking its way north toward the Tiber. Downstream, in a landscape of rugged beauty, more streams arrive from the Cimini range to the west, swelling the river’s flow. Above each confluence juts a spur of land: having natural defenses, many of these have been chosen as settlements in difficult times. Nepi, Castel Sant’Elia and Civita Castellana remain.

Giampietro Cacchioli and Vincenzo Dobboloni lead excursions for Associazione Argilla, a group working to help preserve traditions and facilitate cultural activities in the Treja Basin, about 30 miles due north of Rome. They’ve brought us to see the ruins of Castel d’Ischia, one of a series of fortified lookouts built about a thousand years ago. Here soldiers were housed and signals passed from tower to tower along a security corridor established by feudal lords after centuries of chaos. “Where it had been every man for himself, a bit of order was introduced,” says Giampietro.

At about the same time, another groundbreaking movement was afoot in the area, not far from Castel d’Ischia. Santa Maria ad Rupes – Saint Mary on the Cliffs – was one of Europe’s first monastic communities, with roots dating back to the sixth century when hermits began occupying caves above the Suppentonia Valley. Monasteries were like small, self-sufficient towns where agriculture, crafts and study were nurtured. By the tenth century, feudal nobles had begun protecting and sponsoring these communities. The nobles competed with one another, building graceful churches adorned with paintings and sculpture. Ancient manuscripts were preserved and studied. In a foreshadowing of the Renaissance, art and culture began to stir.

But civilization was not new to the Treja. Before Roman times this was the land of the Faliscans, a sophisticated people who traded with the Greeks, produced fine art and architecture, and joined their Etruscan neighbors in resisting Roman expansion. Their chief city stood on the bluff where the charming town of Civita Castellana sits today. A museum in the massive Sangallo Fortress displays beautiful works of these early people. Down the street at the Mastro Cencio gallery you can purchase faithful copies of Faliscan pottery produced by Vincenzo Dobboloni, who – we learn – is an accomplished artisan as well as a tour guide.

The Treja Basin includes a large regional park with trails along the river, through gorgeous farmland, and up to the spectacular cliff town of Calcata. You can stroll along the Via Amerina, a Roman road with sculptured tombs, ancient bridges and evocative ruins of towns from the remote past. Earlier Faliscan roads slash their way down into the canyons. Nearby Sutri boasts a Roman amphitheater cut into the rock as well as a painted cave of the ancient Mithraic cult from Persia. The entire area is an undiscovered delight with boundless opportunities for walking.

Thanks to Argilla member Alison Kurke for organizing the excursion to Castel d’Ischia.

The Art of Justin Bradshaw 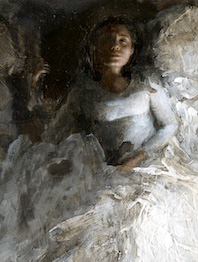 Civita Castellana is home to London-born Justin Bradshaw, whose work includes pen-and-ink drawings, watercolor on paper, and oils on panels of copper and wood. With a meticulous eye for detail and texture, he conveys “events captured in a precise moment, in a specific state of passage,” often making use of concealments and allusions. In recent years his paintings have been exhibited extensively in Rome and Lazio. We’ll meet Justin and see some of his work.

The price of 1300 euros per person (double occupancy) includes daily guided walks, all lodging and meals, and transportation to and from Rome. We’ll stay at the beautiful Palace Hotel Relais Falisco, enjoy delicious meals in my favorite restaurants — and meet artist Justin Bradshaw.

Write to me to book, or for more information.

Please reserve by August 25 for the October trip.
Group limited to 6. 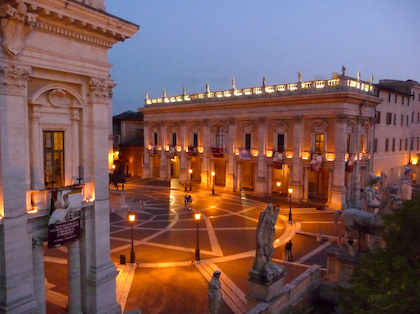 Add days in Rome if you like! It’s one of the world’s most fascinating cities.
More itineraries at www.romanroadwalks.com

Day in Ariccia draws a crowd

Fifteen of us visited this small town in the Alban Hills on May 14th. We toured several of Ariccia’s landmarks including the historic Palazzo Chigi and the rarely-open Martorelli Inn, which hosted some of the world’s most famous artists and writers during the “Grand Tour” days of the nineteenth century. After sampling some of the town’s specialties at a colorful outdoor restaurant, we strolled through the Palazzo Chigi’s lovely wooded park, where the arches from a seventeenth-century aviary were especially compelling. Many thanks to author Margaret Stenhouse and her husband Antonio Rigillo for their help in organizing this event. 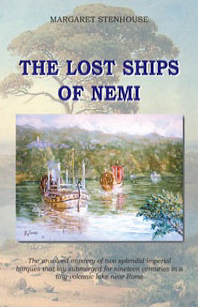 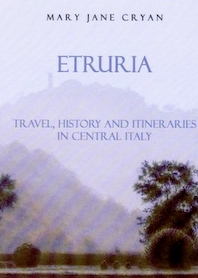 Choose the Treja Basin or another itinerary at www.romanroadwalks.com. There's no “tour group” to join - you choose the number of days, how far we walk, and accommodations that suit the style and budget of your party (two to six). The itineraries are my own discoveries, little known to tourists. Four-day trips begin at about $1200 per person, seven-day trips about $2000 (double room occupancy; single supplement 20%). Includes all lodging, meals and transportation within Italy. Air fare to Rome not included. Write to me and we'll discuss your ideas – there’s no obligation.