Includes daily guided walks of 5 to 8 miles, meals, lodging and transportation for 7 days, and admission to selected museums and historic sites. Excludes airfare to Rome. 15% surcharge for single occupancy. Price in US dollars will be determined in April 2015; currently 1 Euro = US$1.22

In May the Roman countryside explodes with color. Please join me for a week of invigorating walks, wonderful food and comfy beds. We meet in Rome and venture south into a landscape imbued with history. Our guide is the Appian Way, first and most famous of all the Roman roads.

Colors of the Appian Way

Twelve miles out of Rome, the Appian Way climbs the volcanic Alban Hills, legendary birthplace of Latin culture and sacred ground to the ancient Romans. Today colorful towns bustle with life amidst massive chunks of Roman villas and baths. In the wooded hills nestle blue crater lakes, ancient roads, hermit caves and remnants of mysterious religious sanctuaries. Here the likes of Goya, Goethe, Stendahl and Longfellow came to drink in the mystical ambience. The walking is superb. We’ll enter an underground Roman cistern that’s still in use, visit a museum of Roman ships and peek into a mile-long tunnel dug 25 centuries ago to regulate the level of Lake Nemi.

Next the Appian Way skirts the Lepini Mountains, where ancient towns cling to limestone cliffs with sweeping views of the coastal plain and the Mediterranean. Fortified towers guard roads built before Romans times. Locals live side-by-side with Roman temples and striking medieval churches unknown to tourists. We’ll visit the imposing Caetani Castle in Sermoneta, a twelfth-century monastery with elegant Cistercian architecture, and Roman Norba — once a flourishing settlement with temples, paved streets, cisterns and baths, now in picturesque ruins overlooking the lovely Gardens of Ninfa. We’ll have a guided tour of what garden writer Charles Quest-Ritson termed “the world’s most romantic garden.” And we’ll visit the imposing ruins of the Temple of Jupiter Anxur at Terracina, with sweeping views of the Bay of Fondi and the Mediterranean.

Rome a la carte
Delicious day trips in and near the city:
Offered on selected dates in May and October 2015

Planning a trip to Rome? Next May and October you are invited to join me on a series of walks highlighting ancient history and the beauty of the countryside. They’ll range from 5 to 8 hours including transportation, lunch and stops for coffee and/or wine. The pace is relaxed. The cost is 80 Euros per person per day, or 210 Euros for 3 days. Excludes meals and train or bus fares, required on some trips (10 Euros max).

A full week in Rome based on these walks can also be arranged. 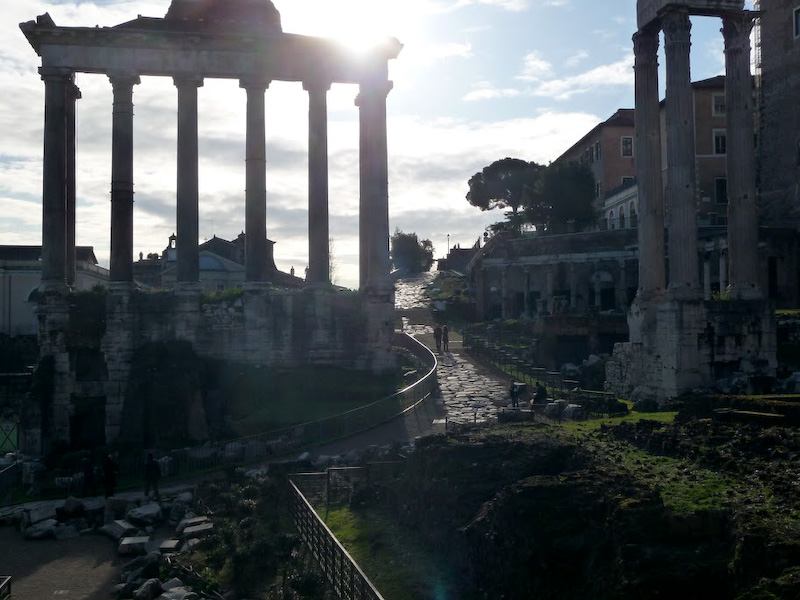 Select any itinerary from the website or newsletters, with your choice of dates, pace and style. Visit www.romanroadwalks.com or write to me for ideas and assistance. I’ll make it easy.